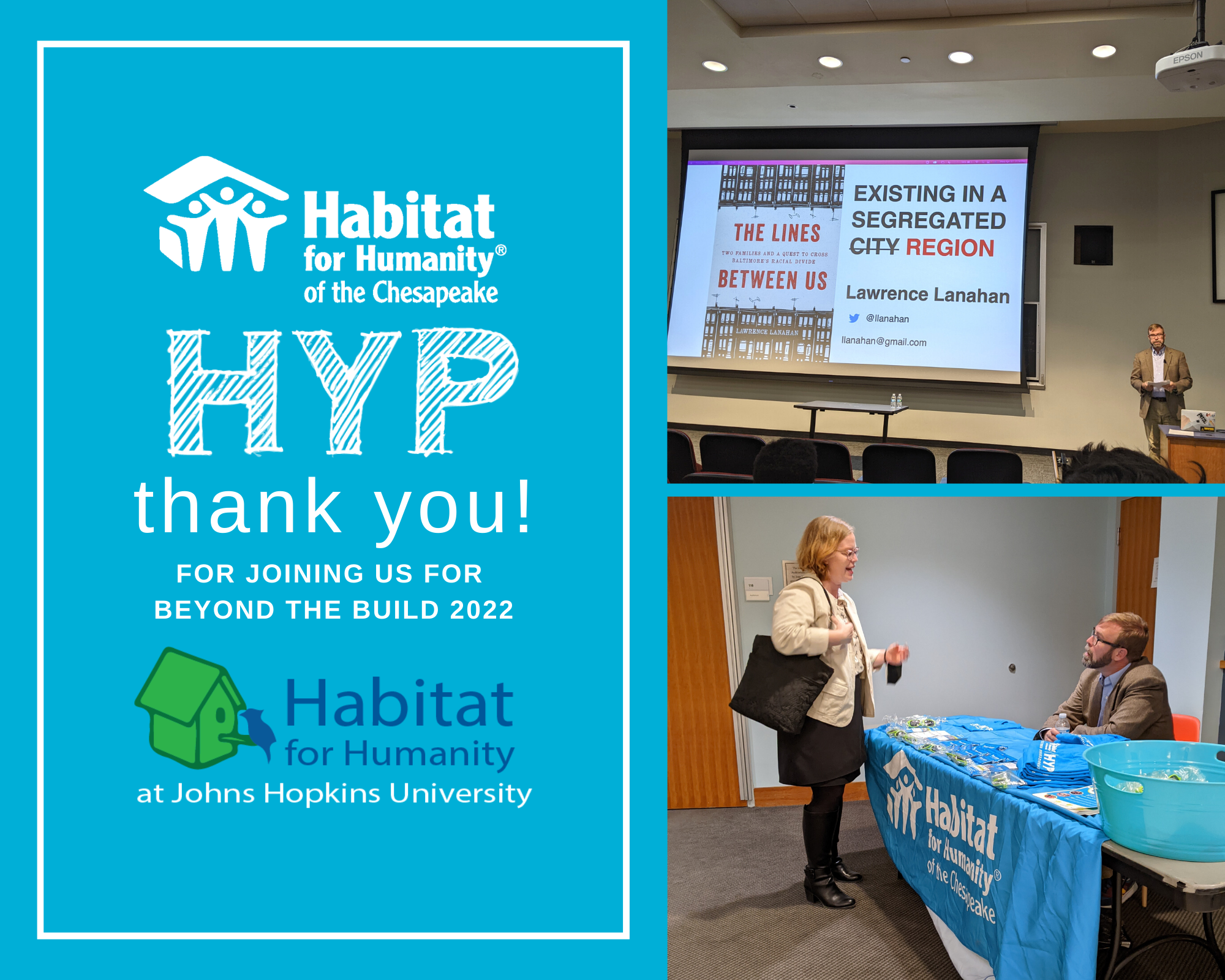 “We have to know these stories. It’s only in understanding how we got where we are that we can really re-engineer and create a positive future,” said Gregg Mitchell, Habitat Chesapeake CAO, as he introduced Lawrence Lanahan’s seminar at the Homewood campus of Johns Hopkins University.

Lawrence Lanahan’s narrative nonfiction, “The Lines Between Us,” covers history from the passage of the Fair Housing Act of 1968 up until the civil unrest that followed Freddie Gray’s murder in Baltimore in 2015.

“The lines between us, the lines themselves, are lines of segregation and opportunity. It’s programmed for us not to cross them, and these people did,” said Lanahan, referring to the individuals featured in the book, Mark and Nicole. Through the lens of their stories, Lanahan tells a broader tale about race and place in Baltimore, and how historic systems of inequity have lasting implications for families today.

The book follows two narratives: a white couple, Mark and Betty, who moved from the suburbs to Sandtown, a primarily Black area in Baltimore, and Nicole, a Black woman and mother who moves from Baltimore to the suburbs of Howard County. Mark moves to Sandtown from the county in an effort to have a personal stake in the community he wants to change; Nicole is eager to leave the city to raise her son in a place where she believes he might have access to better opportunities. Their stories outline a sharp contrast in the way that racism has historically influenced which opportunities are available for individuals and families, from housing to employment to schooling.

The book also follows three decades of research, legal action, and community mobilization to “crack open the white suburbs” that historically excluded Black and minority homeowners. Housing advocates have long noted the need to make housing accessible in suburban areas surrounding Baltimore in an effort to access the “zones of opportunity” afforded by suburban development and social infrastructure.

“Segregated neighborhoods create school segregation which reinforces disparities in home values. Being in a ‘good’ school district — or what is perceived as one — improves your home value. People build wealth through the appreciation of home values, and that directs wealth toward white communities and away from Black ones,” said Lanahan, while discussing the relationship between affordable homes and standard of living in suburbans neighborhoods compared to urban neighborhoods.

“Putting affordable housing in a white community will diversify schools, until white families move to whiter places. Housing and school policy are a couple of the channels through which wealth flows to whiteness,” said Lanahan.

Habitat Chesapeake is dedicated to equitable housing initiatives because we recognize that affordable housing should be accessible to all, especially in areas with historic and systemic inequity based on race. Building homes is only a small part of what we do — we’re working with individuals and families to launch them into success and building wealth. Events like Beyond the Build aim to help change the conversation around affordable housing and invite our supporters to think critically about how and where we build. We’re proud to work in neighborhoods with community leaders who have laid the foundations for consistent change and opportunity access.

Habitat Chesapeake offers thanks to the Johns Hopkins campus, where the local chapter of Habitat Young Professionals has been a consistent partner in Habitat’s work. Johns Hopkins Medicine and Johns Hopkins University were awarded the 360-Degree Supporter of the Year award at the 2021 Coming Home Cornerstone Society award event; view photos here.

“Seeing everyone here is remarkable,” said chapter president Sunny Patel, a graduating senior who looks forward to further graduate studies at Johns Hopkins next year and stewarding the next generation of Habitat club members at the university.

If you or someone you know would be interested in having access to local networking events like this one, as well as volunteer days on- and off-site, join Habitat Young Professionals! Learn more about how to join on our website and follow us on Facebook to stay updated with the latest events.

About Habitat for Humanity of the Chesapeake

Habitat for Humanity of the Chesapeake (www.habitatchesapeake.org) brings people together to build homes, communities, and hope. Since 1982, Habitat for Humanity of the Chesapeake has built more than 780 homes in 19 communities, providing a brighter future for 2,700 children and family members. Homeownership is proven to transform lives – improving health, increasing children’s chances of academic success and offering an opportunity to build wealth across generations. Likewise, homeownership enhances neighborhoods by bringing tangible investment, engaged, long-term residents, rising property values and a sense of community. 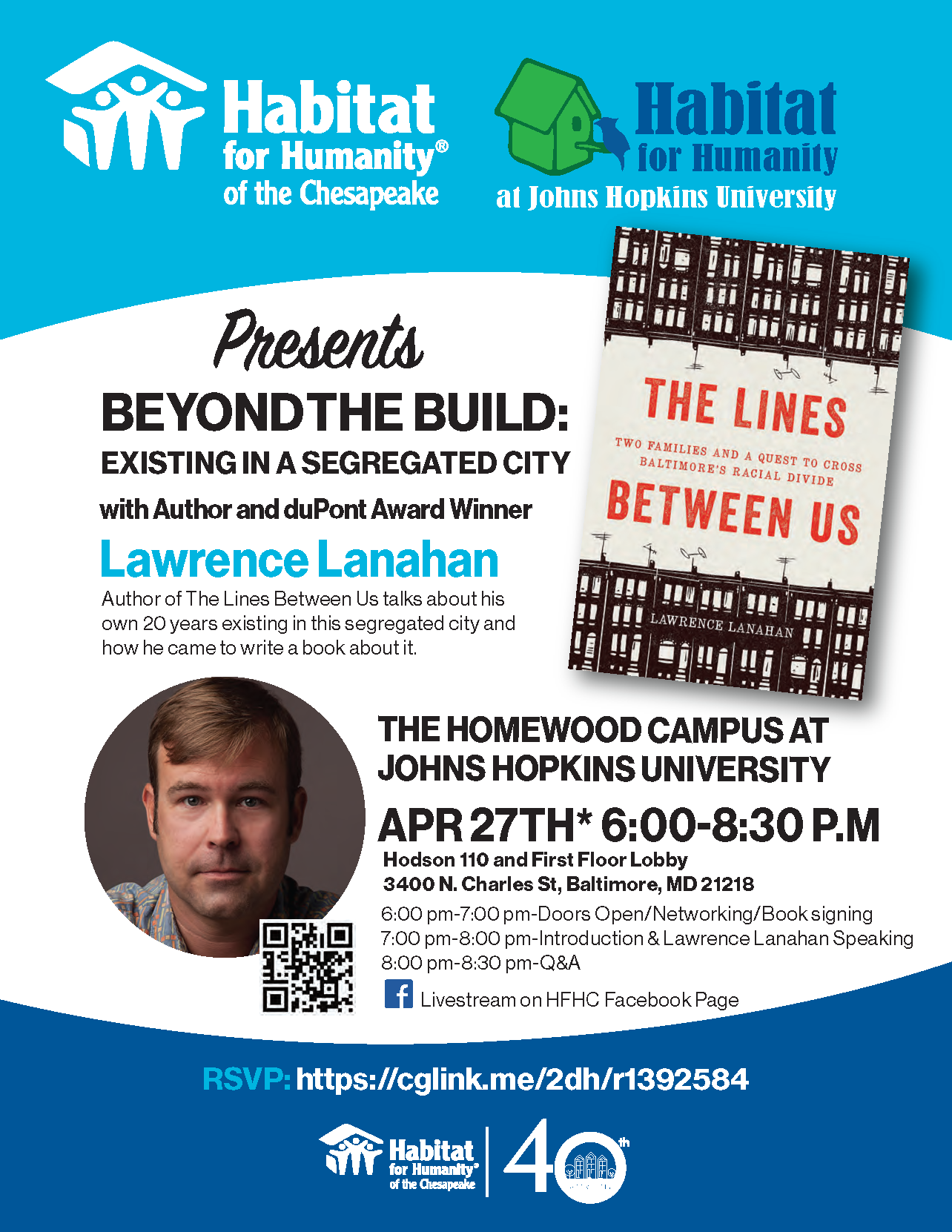 Don’t forget to follow us on social media to stay updated when we host our next Beyond the Build event!

Back to Our Stories >>